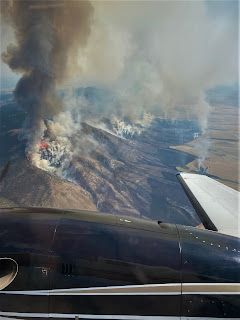 Lusk Fire estimated at 500-acres plus

·   Summary: Power County Road and Bridge were working on the road when lightning struck in their vicinity. They made immediate attempts to stop the blaze while calling the Eastern Idaho Interagency Dispatch Center to report the fire. Road graders in the area put in additional fireline to minimize agricultural damage. Propelled by winds from an overhead thunder cell, the fire quickly spread through brush and grass towards the timbered ridge line. The fire continues to move in a south/southeast direction. “We’ve ordered three additional 20-person handcrews to assist with placing fireline in areas inaccessible to engines and air resources,” said Incident Commander Cory Berkebile. Berkebile would like to thank Power County for their rapid response.